The sense of smell is strongly tied to memory. Certain scents can encapsulate an era, a life stage, or even a specific incident. In this series of posts, I’m going through some significant scents throughout my life, starting from childhood. You can see all of them here.

Fracas was my mother’s scent, not mine. As I mentioned previously, my mother wasn’t one to spend a lot on anything, really. We barely had enough for the basics, and she was always telling us that we had the most important things: love and each other, our little family of three: her, my brother, and me. And that was true.

It was pretty rare that she splurged on anything expensive for herself. Her makeup and toiletries were from the drugstore, and she didn’t really wear perfume. I remember an old bottle of My Sin gathering dust on a shelf. But when I was maybe seven or eight, she discovered Fracas by Robert Piguet and actually bought herself a bottle. Of perfume you got at a department store. Unheard of!

Fracas is a scent of contrasts. Light yet intense. Fresh yet seductive.  This perfume is full of joy, not unlike my mother, who found immense pleasure in something as simple as cutting sheaves of lilacs from the giant bushes by our apartment building every spring. Some perfume reviewers have called it “exuberant,” which I think is correct. Exuberant, but not innocent.

Exuberance encapsulates my mother’s outlook on life. She never cared about looking cool or being sophisticated. She was a product of a fairly sheltered and privileged childhood out of another age–an age that was ending while she was still in it, in the 60s. Her teenage world was literally made up of sock hops, monogram pins, and hot rollers. There’s a famous story her college roommate still tells of the day they met. My mother came bounding over to introduce herself “with ribbons in her hair and her perfect blouse and full skirt,” just as if they were grade schoolers on the playground. They were lifelong friends. 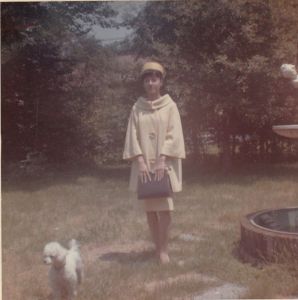 My mother done up Mad Men-style.

But life has a way of battering us all. Not long after she got married, my mother found she had married an alcoholic and a cheater. But she stayed with him, because that’s what good Catholic girls did back then. Then she had two kids and realized that she had to leave him for our sakes. Her life was never so innocent again, but she never lost her sunny outlook. She had her moments, but even when she was dying, she “got more joy out of eating an apple than most people experienced in a year,” a good friend of hers said at her funeral.

Fracas is like this. It fools you with its explosion of flowers, but then there is seductive tuberose and an undertone of musk. With just the flowers, it would be horribly cloying. Just like in life, you cannot have the sweet without the bitter.