When my mother became ill with cancer when I was about 13, several family friends jumped in to help out and take care of us when she was in the hospital. One of them was Bette, who lived just down the street with her husband and two boys. I don’t even remember my mother being good friends with her before she got sick; I think she just stepped in because she was a kind person, her sons were friends with my brother, and it was a neighborly thing to do.

As a young teenager I wasn’t really into talking to adults, especially about scary and serious things like my mom being sick, but Bette always did her best to draw me out, with mixed success. I remember she once admired a chambray snap-front shirt I was rather proud of, which was ornamented with lots of little silver studs. She told me she had always wanted to be a cowgirl, and my shirt reminded her of what she wore when she was young. I probably rolled my eyes at this, imagining a 10-year-old in front of a 50s-style tube TV with a red felt cowboy hat and a toy gun holster, and was chagrined that she associated my super-chic top with western wear, of all things.

I think of Bette when I smell DS & Durga’s Cowboy Grass. If I had to choose one word, it would be “arid.” It smells like a hot, dry prairie, with a good blast of wild herbs and wisps of woodsmoke in the distance. Masculine, yet with a femininity that’s rooted in living things growing and surviving in a challenging landscape. You can envision yourself in a long skirt in the middle of a vast field against a backdrop of sharp hills, shading your eyes against the sun going down on the horizon, alert for anything or anyone that shouldn’t be there, or waiting anxiously for someone who’s expected. 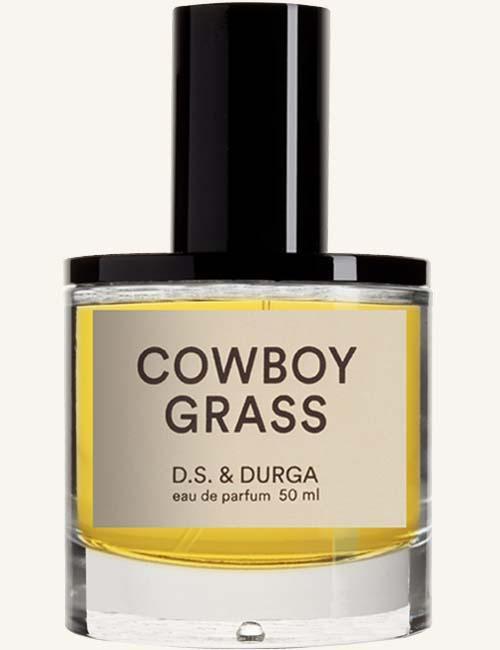 That’s a mirage, of course, as most perfumes are. The lives of cowboys were probably mostly lonely and tragic. The geography of the West was indifferent to human need or survival. Kindness and mercy were probably in short supply. The law only mattered when there was someone around with enough power to make it matter, which wasn’t often. Any number of disasters, natural and otherwise, awaited. Cowboys carried guns for a reason.

I don’t know what happened to Bette. She lost both her sons in a terrible car accident just a few years after my mother died, a tragedy that was so awful in its sheer random cruelty that I still don’t like to think about it. Last I heard she was traveling the world and doing things like sky-diving. Because what is that kind of risk when you have already lost everything? How do you go on after that? Perhaps, like the cowboys whose lives she idealized, she simply bore the fate that had been handed to her, and continued down the trail, living a grand and terrible truth that most of us don’t ever have to truly face.